Oh pilot season. Besides Christmas it’s the best time of year. Especially since it comes right along with my birthday. There hasn’t been a whole lot on the menu so far this year, but I’m here with my thoughts on what I’ve seen. I will stick with a couple new shows along with other old shows. Tonight I’ve got two high concept dramas for you, and one sitcom. 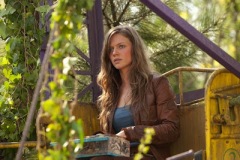 By far, the show I was most excited for when the trailer premiered in May. It’s an ambitious concept. All electricity suddenly stops working one day, and 15 years later this is what the world is like. That’s the big lens. Our small lens heros (as all apocalyptic and post-apocalyptic stories come equipped with them) is one family that seems to be intimately involved with the cause of the blackout. Charlie (Tracy Spiridakos), our spunky young Katniss-esque heroine. She’s not a complete copy though, she uses a crossbow instead of a regular bow (side note, there seem to be a pletora of very well made bows, crossbows, and swords in this non-electric world). Her father, Ben (Tim Guinee), was killed in a gun fight after the Militia of the Monroe Republic attempted to take him (yes, all of those things I said happened). Her mother (Elizabeth Mitchell) died sometime earlier. They take her brother (Graham Rogers). Her only hope is to find her Uncle Miles (Billy Burke) who’s apparently “good at killing” and get him to help find Danny. Along the way she brings her father’s lover (Anna Lise Phillips), a British doctor from their “village,” and a dorky neighbor (Zak Orth) who Ben entrusted with an ominous looking flashdrive necklace. Add a couple of guys from the famed militia and you’ve got your cast of misfit characters. I was not as impressed by them and their interactions during the pilot as I was by the concept itself.

The show glosses over the initial consequences of the blackout, merely showing a young Charlie eating all the ice cream in the house and a younger Miles walking after his car doesn’t start, but there’s no real answer to how we got where we were except an ominous voice over telling us that “governments fell.” The world looks a  little too put together just fifteen years after we lost all electricity. I kept asking myself, where did they get all of those candles from? The finer details aren’t really this show’s strong suit. But it does revel in showing Chicago landmarks covered in dirt and moss, and in teaching its audience how bad technology really is for us.

Moving forward the show needs to be a little less preachy and a little more character-driven, focuses less on the novelty of the world without electricity and more on how the characters deal with it. It’s already got the addictive intrigue with Ben’s involvement in the blackout, the dead mother and so much more. It just needs the characters to hold it up.

Verdict: Keep watching, but on Hulu when you feel like it.

Next we move over to ABC’s high concept attempt for the year. Despite the premise about a nuclear submarine that basically defects from the US after being ordered to bomb Pakistan for no reason at all, it’s actually  the most red-state show I’ve seen since NCIS. The plot of the pilot, which was completely revealed in the upfronts trailer, consists of a nuclear sub captained by Andre Braugher (the character’s name is negligible, it’s Braugher’s show) where at first everything is fun and games. All of a sudden an order comes through the Antarctic network (really guys?) which apparently would only be used if DC was completely wiped out, to fire on Pakistan. Captain Braugher, being not, you know, an idiot, wants to know why it came through back channels while he’s “sitting here watching Hannah Montana.” That was the best part of the whole pilot. Andre Braugher saying “Hannah Montana.” Blah blah blah, Captain is relieved from duty, blah blah blah, the US bombs the submarine, blah blah blah, they bomb Pakistan and start a war. Oh and during this whole thing there’s a sexy defense contractor who somehow knows about the whole conspiracy.

Anyway the sub pulls up on a South Pacific island and basically conquers it, sets up in the NATO watch station there, and declares on television that they want the US government to resign. End pilot. The underpinning behind the show is not that the US is evil, but rather that the true patriot is willing to turn on his own government when they have lost touch with the American way. It’s a little scary. Of course the viewer’s sympathies go to the plucky crew, who are only trying to Do the Right Thing, but we are led to believe the Right Thing is inherently American separtism. Woof. Like I said, super red-state, super tea-party, and super not subtle about it all. To top it off the characters are flatter than the screen you watch it on, and although it hasn’t surfaced (see what I did there) yet, there’s bound to be rampant racism on the South Pacific island. All in all, I wasn’t impressed.

Verdict: There are enough new shows this year. Pick a different one.

One of the first truly charming comedies I’ve seen in a long while, Mindy Kaling’s much anticipated solo act started off quite well. What could have ended up a little on the cliched side turned sweet and relatable, as we followed Mindy through a rather hectic two day period in her life, starting with a little backstory. Why did the show look a little cheesy? Because Mindy (now this is character Mindy, when I’m talking about the actress I’ll call her Kaling) is cheesy of course! Cue a series of flashbacks of young Mindy as a kid, in high school and in college, obsessed with romantic comedies and begging her life to be like one of them. All of a sudden, one day during her residency as an ob/gyn she gets trapped in an elevator with the seemingly perfect man (a hilariously guest spot from Bill Hader, hopefully recurring). They both drop files. Her hair falls down. Her voice-over tells us that only months later they moved in together. Months after that, he falls in love with the young, blonde, cafeteria girl. Typical. And that’s where Mindy’s life stops being a romantic comedy and starts being the adorable mess that gave the series its first (and ultimately dropped) name, “It’s Messy.”

The rest of the episode follows Mindy’s antics after she gives a drunk and incredibly inappropriate toast at her ex’s wedding, and then falls into a stranger’s pool. And it’s funny, it’s physical, it’s witty, it’s really everything you’d expect from Mindy Kaling. A lot of comparisons will probably be made to Fox’s other female-driven multi-cam sitcom without a laugh track, New Girl, but so far Mindy has succeeded where New Girl failed: Mindy is a character that I would believe is real, whereas Jess is so fake they made up the term “adorkable” for her. I’m excited to see where this show goes, how they deal with the obvious sexual tension between Mindy and her seemingly jerkish coworker Danny, and how they deal with Kaling in general, a really talented actress and comedian. As comedy alums leave known products to strike out on their own (Tina Fey to 30 Rock, Amy Poehler to Parks and Recreation, etc) Mindy has a lot of potential.

Verdicit: Watch live, it’ll be fun to watch with friends.

Okay so that’s it for now. In the next couple of days I’ll have my reactions up to The New Normal and others. Stay tuned!