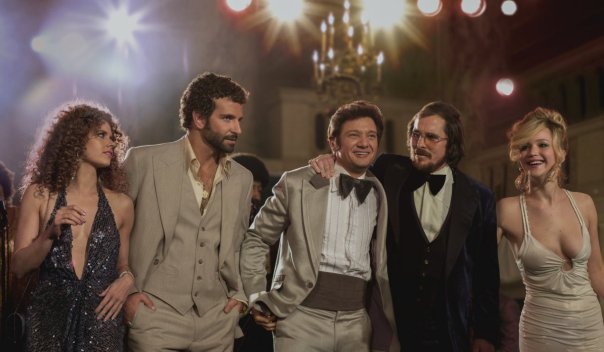 Where there are Oscar nominations there are Oscar snubs. It is a fact of life and it’s also what kind of keeps them interesting. The nominations for the 86th Oscars went out today and there were snubs and mild surprises aplenty. My predictions were okay this year, I went 9 for 9 in the Best Picture category but I was a little blindsided by the acting categories, I will admit. Overall I got 37/44 in the categories I predicted. But more than just a list of who’s in and who’s out, the nominations can also be very telling about how certain films are doing in the overall race. So here are a few thoughts on what this all means.

1. The David O. Russell Effect is a force to be reckoned with. Two years in a row now he’s scored an acting nomination in all four categories, which hadn’t happened for thirty years before Silver Linings Playbook. His four nominees today have all been previously nominated for a Russell film, and two of them won.  Russell is an actor’s director, plain and simple, and the acting branch is the single largest voting branch in the Academy. But it’s not just acting. American Hustle walked away tied with Gravity for most nominations, today. Hustle may seem unstoppable at this point, and indeed it scored important nominations in Editing and Screenwriting, but it was viciously snubbed for Hair and Makeup. The auteur picture Jackass Presents: Bad Grandpa, however, got that key nomination.

2. The Wolf of Wall Street was not too racy for the Academy. Not at all in fact. With five nominations, including directing, screenplay, picture and two for acting,  it looks like the voters were digging three hours of drug-fueled insanity. Despite this unexpected love, the film isn’t really in play for Best Picture, as it missed out on Editing, and no film has won Best Picture without an Editing nomination since 1980. But hey, we now live in a world in which Jonah Hill is a two-time Oscar nominee. So think about that for a bit.

3. Noprah! (And some other acting snubs). Speaking of Wolf and Hustle, those late-breaking acting nominations did not come without a price. It’s Bale and DiCaprio over Tom Hanks and Robert Redford in leading actor, and Hill and Cooper over James Gandolfini and Daniel Bruhl in supporting. In the Best Actress category I learned that you should never, ever bet against Meryl Streep, and with her and Amy Adams in there was no room for Emma Thompson. But then we turn to Best Supporting Actress where I was happily surprised to hear Sally Hawkins’ name called first (as I’ve said before, I think Cate Blanchett owes a great deal to Hawkins) and then happily astonished when Miss Winfrey’s name was absent. I thought Hawkins might sneak in over Roberts but apparently voters hated The Butler more than they hated August: Osage County. I think the worst part of Oprah’s snub is that we will not get to see or talk about her Oscar dress. Oh well, there’s always the SAGs.

4. Philomena over-performs and Captain Phillips underperforms. When it comes to films based on a book that’s based on a true story about people with the letter “P” in their name, it was better to bet on an old woman searching for her long lost son than a ship captain battling Somali pirates. Philomena was able to grab four nominations, including a surprising Best Picture nom (which I predicted and am so very happy about). Phillips on the other hand, walked away with six nominations (including the ever-important Editing) but lost out on Director and Actor, which many predicted it would get (Tom Hanks has not been nominated since Cast Away, if you can believe it). At this point it might be the film with the most nominations that doesn’t actually win anything on the actual night, but we’ll see. And if Jonah Hill’s nomination count freaked you out, you should note that Steve Coogan grabbed two this morning, for writing and producing Philomena.

4. Saving Mr. Banks, The Butler and Inside Llewyn Davis are left out in the cold. If I had told you yesterday that The Lone Ranger would net more nominations for Disney than Saving Mr. Banks, what would you have said to me? It’s what happened today (and while I think it’s hilarious, I actually can’t figure out which movie I disliked more). Banks was just one of a few early frontrunners to really crash and burn today. The Butler was completely shut out and Llewyn Davis only managed two nominations (Cinematography and Sound Mixing, both deserved but not nearly enough).

5. Dallas Buyers Club continues to show its wide-ranging support. The Wolf of Wall Street missed an Editing nomination but Dallas Buyers Club did not. It also grabbed Original Screenplay and Makeup and Hairstyling in addition to the acting noms and Best Picture. That’s a lot of below the line nominations for a not particularly technically ambitious film, which shows the support the film has in the voting body as a whole (which I really, really don’t get). This only bodes well for Matthew McConaughey and Jared Leto, who are definitely the film’s best shots at winning.

6. Big names in documentaries, foreign films and animation are snubbed. Perhaps the most successful nonfiction film of the year, Blackfish, missed out on a nomination, and the French love story and Palme d’Or winner Blue is the Warmest Color wasn’t even eligible (weird Academy rules). Monsters University, meanwhile, becomes only the second Pixar movie not to be nominated for Best Animated Feature (the other one was Cars 2, and yeah I was okay with that snub). Perhaps the most disappointing documentary snub was director Sarah Polley’s Stories We Tell, which is a fantastic film that had a lot of critical support behind it. But here’s to The Act of Killing, The Great Beauty and The Wind Rises, who will hopefully take the prize in their respective categories.

7. There were a lot of shakeups today, but the Best Picture race is still between 12 Years a Slave, American Hustle and Gravity. It was always these three, wasn’t it? They’re leading the nomination count and the conversation this morning. 12 Years missed out on two nominations that many thought it would grab, Original Score and Cinematography (because John Williams has to be nominated every time he works, even on a terrible movie, and apparently Nebraska was like, in black in white or something), and so has nine nominations to Hustle and Gravity‘s ten. I’ve seen that described as “underperforming,” to which I would only have to laugh. If anything, I think it’s Gravity that is losing steam. Although it rightly received a slew of technical nominations, it is the only Best Picture nominee without a screenwriting nomination, which also fits (the story was just a little silly).

12 Years is heading back to theaters just in time for Martin Luther King Day, and there are plenty more awards and interviews to get through before the field really starts to clear up. The number of nominations isn’t necessarily so indicative of number of wins. At this time last year the defining talking point was about how Argo had no shot because of the infamous Affleck directing snub, and Lincoln was leading the field in nominations. Silver Linings Playbook had a similar spread that Hustle has now, but at the actual ceremony the film only walked away with Lawrence’s Best Actress win. And if Gravity is comparable to anything from last year, it’s Life of Pi, and I would not be surprised at all if Alfonso Cuaron pulled an Ang Lee (a win for Directing but not Picture). But really, you never know what’s going to happen. Any one of these three could grab momentum at any time between now and March 2nd.

2 thoughts on “7 Thoughts on the Oscar Nominations”