Realizing that although I’d seen many, many movies in my life, I still hadn’t seen enough, I recently created a list of the 500 Best Movies I’ve Never Seen. As I attempt to watch them all, I will write about my experiences seeing classics (and some not-so-classics) for the first time. Warning: these are spoiler-ridden posts, as the films are all past their time in theaters (some, long, long past). If you haven’t seen the film I recommend you first see it and then read. If it’s on the list it’s probably worth seeing.

A lot of the movies on this list are there because I suffer from something I like to call “youngest child syndrome.” It’s a common disease in which children of families with multiple children who are the youngest tend to miss out on things. I never saw some classic children’s movies because of the simple fact that, by the time I was seven or eight, my parents weren’t going out of their way to show me kids’ films. Instead just let me tag along to the adult movies they were watching. And so I never saw The Iron Giant although I had always meant to.

Perhaps that is the reason why I’ve always enjoyed children’s movies and tv, even beyond my own childhood. I mean, I recently just finished watching the Avatar: The Last Airbender spinoff, The Legend of Korra and I thoroughly enjoyed it. There is something to be said for entertainment for children that isn’t dumbed down at all. Full, cohesive and mature stories that simply are told from the perspective of children are the best kind. It’s part of the reason that Avatar: The Last Airbender was a huge success on tv and why the live-action movie version failed so miserably. It started to treat the story as less than it was.

And so, it was genuinely refreshing to see such an earnest kids’ film. The story of Hogarth, an outsider in 1954 Maine, was just the story of a little kid who wants a friend. His friend ends up being a 60 foot tall giant with the capacity to destroy the world, but still, you know, cuddly. It’s really wonderful to see how Hogarth uses his experience with the giant to open up to his mother and to make new friends. He just needed somebody who understands him, to make that first step. And then he was able to make more after that.

The Iron Giant himself was in the same predicament. We never really learn where he came from, but its irrelevant anyway. We know what we need to know: that he’s lost and alone and needs a friend. And so these two lost souls meet one fateful night and forge an unlikely friendship. And it’s really beautiful. 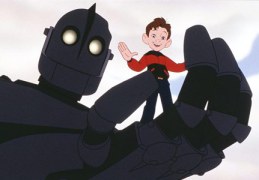 The movie also contains some truly sharp commentary. Agent Mansley, the bumbling government agent sent to investigate the strange goings-on in the small Maine town, is the crazed adult villain from the mind of children, but also from the real world. He’s impulsive, has a one-track mind, and would rather use children to achieve his goals instead of trying to understand them. The scene that montages his various attempts to get Hogarth to talk to him is both hilarious and spot on, as he cycles through a cliched list of names adults use to try to prove to children that they’re their friend. Sport. Scout. Buddy. Kiddo. Tiger. Champ. Hogarth wasn’t falling for it.

The movie also deals with incredibly mature themes, including the nuclear age. Set in the height of the Cold War, there are allusions to the old “Duck and Cover” drills as well as anxiety over Sputnik and the Space Race. A lot has been made recently of the nuclear problem in movies, brought to light by the use of a nuclear missile in the recent smash, The Avengers. I don’t think I’ve ever seen it dealt with so deftly, or a satire so plain, than in this film. Evil Agent Mansley is determined to destroy the Iron Giant, going so far as to order a nuclear strike on the robot. But he’s in the middle of a town in Maine, not in the ocean or the USSR. The bomb will kill them all, including Mansley, who makes a pathetic attempt to escape. It is only because of the giant himself that they are saved. He sacrifices himself to save his new friends. In this one scene in a children’s cartoon, director Brad Bird tackles the problem of over-reliance on a nuclear solution, and how it will inevitably destroy us all. And in the real world, we may not have an Iron Giant to save us. A children’s movie did all of this. I wish they would make more movies like this, instead of things like Ice Age 4. Really, kids deserve better.