Some might call Joss Whedon’s adaptation of Shakespeare’s comedy, filmed in just 12 days at his own house using a smattering of actors from his previous work, “rushed” or “American” or “irreverent.” I’d call it “light” and “fun” and “charming.” Definitely “enjoyable.”

There may not be a lot of weight to Whedon’s adaptation, but there doesn’t have to be. Shakespeare’s comedies were just that, comedic. Silly more often than not. They ended in weddings and the tragedies ended in deaths (no, I didn’t spoiler alert you, there’s a statute of limitations on spoilers and its not 400 years).  Yes there’s drama and sometimes you may think the lovers won’t work it out, but of course they do.

Although Much Ado is not my favorite of Shakespeare’s comedies (see As You Like It) I really enjoyed this adaptation. It’s dressed down and casual in every sense. And after your ear becomes accustomed to it, it’s easy to forget that the language is Shakespearean. That the film is in black and white helps; the colors would be distracting. Shakespeare is regularly set outside its Elizabethan roots, and modern-day SoCal is no better or worse than any other setting. While the majority of actors are not Shakespeare veterans, they all have the necessary chemistry and good direction working for them. And they embrace the airy tone of the film so that the language seems natural rolling off their tongues.

While some of Shakespeare’s witty dialogue is lost on a modern audience, Whedon compensates by ramping up the physical comedy and visual gags. Amy Acker (Beatrice) and Nathan Fillion (Constable Dogberry) are particularly good at this. In one memorable seen Acker, eavesdropping on a conversation, falls, crawls, and bumps her head in the space of a minute, but it’s never cheap or cheesy. Acker shines in general in the ensemble film, showing the greatest command of the language and of her character. She dominates every scene she is in, and weaker characters, like newcomer Jillian Morgese’s Hero, suffer when they share the screen with Beatrice. Although Clark Gregg, as Beatrice’s uncle Leonato, is memorable in his own way, delivering some of the funniest and most dramatic moments of the film.

Shakespeare is really hard to do onscreen, since by definition his work belongs on stage, but Whedon does a remarkable job making his version of Much Ado accessible to an average moviegoer, as well as enjoyable to a Shakespeare aficionado. You probably won’t cry but you’ll definitely laugh.

Today is the opening of Joss Whedon’s new film (alas, only in limited release, wide release June 21st): a black and white, low-budget version of Shakespeare’s Much Ado About Nothing (and it’s getting some great reviews).

The movie was shot during a break in his busy Avengers schedule in 2011, in just 12 days at Whedon’s own home in Santa Monica, CA. It has been described by the director as a palate cleanser, helping him relax after the insane Avengers shoot before the insane post-production began.

To do the micro-budgeted and top-secret project, Joss called on his retinue of loyal actors, many of whom have appeared in multiple shows or movies he’s done in the past. They may not be household names, but to Whedon’s devoted fans (known as Whedonites) Much Ado is populated with the stars of the Whedonverse, the vast and sometimes interconnected world of Joss Whedon on film and television. For the Whedon neophyte, perhaps only ever exposed to The Avengers or Doctor Horrible’s Sing-Along Blog, here’s a comprehensive guide to some of the verse’s most prolific actors who will be tackling the Bard this weekend in theaters.

In Much Ado…she plays the quick-witted Beatrice, one of Shakespeare’s more celebrated heroines.

Most famous in the Whedonverse for…playing the adorable, nerdy, and doomed Fred Burkle on Angel. Acker came into the Buffy spin-off at the end of its second season, as a physicist trapped in an alternate dimension where humans are called “cows” and kept as slaves. After Angel rescues her, Fred becomes a devoted member of the Angel Investigations crew. The love triangle between Wesley (Alexis Denisof, see below), Gunn (J. August Richards), and Fred is integral to the rest of the run of the show. The character starts out almost too sweet, too naive for someone who lived for years in basically Hell, but soon her own special darkness emerges. But mostly she’s adorable (see clip below).

Also appeared in…Dollhouse (Dr. Saunders/Whiskey) and The Cabin in the Woods (Lin). Whedon seems to really like to cast Fred as a Doctor, be it MD, PhD, or Scarologist (that’s a real word). Not that he’s typecasting, or anything.

Fun fact… Acker has appeared in Once Upon a Time and Alias, shows that feature Buffy and Angel writing alums Jane Espenson and Drew Goddard, respectively.

In Much Ado…Denisof plays Benedick, the sworn bachelor who falls for Acker’s Beatrice.

Most famous in the Whedonverse for…his role as Wesley Wyndam-Price first on Buffy and later on Angel. Wesley started out as a foppish and foolish replacement watcher in Buffy‘s third season, and reportedly was only supposed to last an episode or two. But the character worked and so did Densiof. Halfway through Angel‘s first season he was back, and slowly developed into one of television’s most complex and tragic characters. Especially when it came to his relationship with Fred. Whedonites get a special treat in Denisof and Acker’s casting as Shakespeare’s famous lovers, and maybe some vindication for all the years they watched the couple’s troubles on Angel.

Also appeared in…Dollhouse (Senator Daniel Perrin), The Avengers (The Other). If the Other shows up in The Avengers 2 Denisof will far and away be Whedon’s most-used actor (that’s him in the picture on the right, just in a tiny bit of makeup).

Fun fact…Denisof met his wife Alyson Hannigan while working on Buffy, where she played Buffy’s BFF Willow. For the past eight years she’s been Lily on How I Met Your Mother, where Denisof has guest starred several times as the sleazy news anchor, Sandy Rivers. The show has cast numerous Whedonverse actors including Amy Acker, Tom Lenk and Morena Baccarin. Whedon later cast HIMYM actors Neil Patrick Harris and Cobie Smulders in Doctor Horrible’s Sing-Along Blog and The Avengers, respectively.

In Much Ado… Fillion will be providing some comic relief as the delightfully bumbling Constable Dogberry. Whedon says the portrayal was inspired by Law and Order: SVU type detectives.

Most famous in the Whedonverse for…captaining the spaceship Serenity as Malcolm Reynolds in Firefly and its followup film, Serenity. Mal was an anti-hero you could really root for in Whedon’s sci-fi western that was criminally cancelled after just 11 episodes on the air (14 were produced). The show’s incredible DVD sales and the fans’ (Browncoats, a subsection of Whedonites) fervor helped to greenlight a film version that reunited the entire original cast. Unfortunately, its box office returns were disappointing. A big part of the show’s draw was Fillion’s undeniable charisma and presence. He may be more famous for his role in Castle, but to some, he’ll always be Captain Mal.

Fun fact…Fillion actually auditioned for the role of Angel on Buffy way back when, but the role, of course, went to David Boreanaz.

In Much Ado…he plays the lover Claudio, who falls for Hero. He also schemes to get Benedick and Beatrice together.

Most famous in the Whedonverse for…playing Topher Brink in Whedon’s trippy sci fi drama, Dollhouse. Dollhouse already had a couple of Whedon alums (Eliza Dushku, Amy Acker, and in Season 2 Alexis Denisof and Summer Glau) but Kranz was a welcome addition to the verse. Topher offered some much needed down-to-earth-ness and comic relief in the series that was sometimes hard to comprehend (there exist, all over the world, brothel-like houses full of programmable people that can have personalities uploaded and erased from their brains). Topher was a scientific genius, but he also had toys in his office. As the series turned darker in season 2 Topher had to grow up, but even that was endearing.

Also appeared in…The Cabin in the Woods (Marty). Otherwise known as the inventor of the travel-mug-bong.

Fun fact…Kranz will be seen in the upcoming film, Lust for Love, which is currently in post-production. The movie also stars Felicia Day, who has a host of Whedon credits under her belt, including a two-episode stint on Dollhouse.

In Much Ado…Lenk plays Verges, a member of the city Watch, but not so bumbling as his partner Dogberry.

Most famous in the Whedonverse for…playing Andrew Wells, aka “Tucker’s Brother,” in Buffy and for 2 episodes of Angel. Andrew started out as a part of the Trio, the triad of nerds who declared themselves Buffy’s nemeses in season 6. Everything is fun and games until one of the Trio, Warren (Adam Busch) takes things to far and suddenly they’re not playing at being evil anymore. Alternating between absurd, endearing, and pitiful, Andrew becomes a pseudo-member of the good guys in season 7, and much needed comic relief in that uneven season. His need to tell stories and make up fantasies only highlights how affected he was by the bad things he did while under the influence of the First Evil.

Also appeared in…The Cabin in the Woods (Ronald the Intern).

Fun fact…Lenk appeared in the 2011 episode of Psych, “This Episode Sucks,” that parodied vampire movies and series like Buffy. It also featured the original Buffy (from the 1992 movie), Kristy Swanson.

Sean Maher will be playing the evil Don Jon in Much Ado, but is most loved to Whedonites for his role as Simon Tam in Firefly and Serenity. He appeared with Jewel Staite (Kaylee in Firefly/Serenity) in an episode of Warehouse 13.

Reed Diamond, Don Pedro, started in the Whedonverse as the testy Laurence Dominic in Dollhouse. He has guest-starred on Castle with Nathan Fillion and Bones with David Boreanaz.

Clark Gregg, Leonato, is most famous in general for playing Agent Phil Coulson in Iron Man, Iron Man 2, Thor, and the Whedon-helmed The Avengers. He joins the Whedon television verse this fall in Marvel’s Agents of S.H.I.E.L.D. Angel alum J. August Richards will appear in the pilot.

Ashley Johnson, Margaret, appeared in two episodes of Dollhouse and as an unnamed waitress in The Avengers. She would have had a bigger part in the superhero movie, including an early scene with Captain America, if not for the woes of editing.

Jillian Morgese, Hero, was an extra in The Avengers who bonded with Whedon between takes. He asked her to audition for Much Ado, which is her first major screen role.

Riki Lindhome, Conrade, guest-starred on a season 7 episode of Buffy. She appeared in The Last House on the Left with Much Ado costar Spencer Treat Clark.

Nick Kocher and Brian McElhaney, aka BriTANick, First and Second Watchmen, have never appeared in a previous Whedon project, but Whedon himself has appeared in one of the duo’s sketch comedy videos.

This is only the Shakespearean snapshot of the Whedonverse. It’s getting crazy big these days. Isn’t that wonderful. 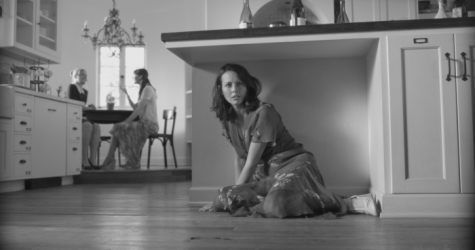 For those of you who are, like me, obsessively counting down to the June 7th release of Joss Whedon’s black and white, shot-in-12-days-at-his-house, modern re-telling of Much Ado About Nothing, I have good news! A new trailer premiered this morning on Digital Spy, aimed at the UK (which is why it calls Whedon the acclaimed director of Avengers Assemble, the UK title of The Avengers).

This trailer has a whole lot more Fran Kranz and Sean Maher (of Dollhouse and Firefly respectively) and a whole lot more Amy Acker (Angel) falling down. All of these things are pleasing. Although it does seem to focus more on the drama and less on the comedy. There’s quite a bit more footage than in the original trailer, it’s definitely worth a look.

Watch the new trailer at Digital Spy and check out the original trailer below.