Realizing that although I’d seen many, many movies in my life, I still hadn’t seen enough, I recently created a list of the 500 Best Movies I’ve Never Seen. As I attempt to watch them all, I will write about my experiences seeing classics (and some not-so-classics) for the first time. Warning: these are spoiler-ridden posts, as the films are all past their time in theaters (some, long, long past). If you haven’t seen the film I recommend you first see it and then read. If it’s on the list it’s probably worth seeing.

Pulp Fiction. Even its name connotes some type of importance, classicism. Everyone I talk to about film tells me that I have to have to see Pulp Fiction. It’s groundbreaking. It’s life-changing. It’s the best movie of the past 25 years. It’s just plain awesome.

Before I sat down to watch the movie, I had no idea what Pulp Fiction was about. I knew that Samuel L. Jackson was in it, that it was a Tarantino film, that it involved guns and drugs and a pop tart, but I didn’t know what the story was. So when I sat down to watch it with my roommate, herself a cinema studies major, I asked her, quite plainly, “so, what’s it about?” “A lot of things,” she replied, deepening my confusion. I sighed and decided to just get on with it and watch the movie.

I don’t know if “watched” is the right word to describe my experience with the movie. “Absorb” might be better. I didn’t watch it. I sat back and let the sounds and images flood over me. In essence, Pulp Fiction is about four intertwining stories and how and why they intertwine. I’d watched it, so I knew what it was about, but did I really know what it was about? Probably not.

Quickly I learned that the root of Pulp Fiction is not necessarily in the “fiction” itself, but in the overall feeling the film gives you. The story can be a little hard to follow when you don’t know how all the puzzle pieces fit together. But the story didn’t matter all that much. The overall pastiche of images and clips and sounds and characters and blood was the important part of the movie. I don’t particularly know if the idea of Uma Thurman and John Travolta doing the twist is particularly profound but the image of the two of them is resonating. They’re drunk. They’re high. They’re in a nostalgia 50s restaurant. They’re attracted to each other and they shouldn’t be. And they’re doing the twist, of all things. Two people who never looked so out of place and yet fit in so well. It might have been my favorite part of the movie. 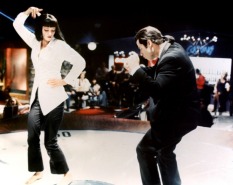 To me, what makes a movie great is its ability to continue to amaze on multiple viewings. Without even doing so, I knew that Pulp Fiction was going to be one of those movies.One of my favorite things to do is to re-watch a movie or tv show. It’s probably the English major in me but I feel like there is so much to be gleaned from any one piece of art (and yes, I think both movies and tv are art, get over it) than you can get in an initial exposure to it. Whenever I write a paper about a book I read the book at least twice. There’s always something new to find. I’ve seen every episode of Buffy the Vampire Slayer at least three or four times, but each time I go through the series again I find something new. And so as I sat in my living room and watched a couple argue the virtues of robbing restaurants, I knew there was something I was missing. And I was dying to find out what it was.

Is it the best movie of the last 25 years? I don’t know, I haven’t seen enough movies to judge that yet. But it was good. Damn it was good. I don’t usually like this kind of film. I abhor graphic violence, not out of any moral qualms but simply because I’m incredibly squeamish. I also usually like character driven movies with a protagonist I care about, rather than a smattering of smaller characters with questionable ethics. But there’s something about the pastiche that works so well here. When you see that Samuel L. Jackson and John Travolta are in the diner being robbed, there’s something almost poetic about it. The audience gets to smile at a private joke while Tim Roth has a gun pointed at his head. And so I really can’t wait to watch it again. I want to see what I missed.